January - I lost my brother in a tragic accident leaving his three weeks old baby, wife and family. It was the most painful thing that ever happen to me. It left a deep scar in my heart. Till now, I'm still in the process of recovery, I still miss him. It was the first Christmas and New Year that he was gone, it was different. Oh, one positive thing happened, I got promoted in work. But it wouldn't compensate the lost that I had.

February & March - My mom and my bro was hospitalized at the same time. We are still mourning for my brothers lost, then, another trial.

April - My brother's wife and baby, left the house to live in a different city, maybe its one way for Ching to move on, and also her work assignment was transferred. I lost my brother, then i physically lost the two most important person in his life. One good thing that happened? I met my long lost cousins and relatives.

May - We lost my dad's mother. Emotionally, I could not explain what i felt then, I didn't know her personally, it was the first and last time I saw her. With this, I was able to go my father's hometown. In Viga, Catanduanes.

June - I was sent to Japan for a technical meeting with our client. It another achievement for me in terms of career.

July - My fiance arrived from Japan, he proposed to me, he gave me a diamond engagement ring. From then on, we started planning our wedding, but to this day, we still didn't have a definite date.

August to October - It was smooth sailing. No major problem encountered. And I'm thankful for that.

November - I got another promotion. More jobs, greater responsibilities. So far I'm satisfied with the way things are going.

December - Christmas season, and Allyssa Mae's first birthday. It's a happy month, but still there's something lacking. Only time can tell what will complete it. Only God can tell.

I've been through a lot this year, it made me stronger.
I just hope that i will have a positive year in 2009.
Posted by yessamin 1 comment: 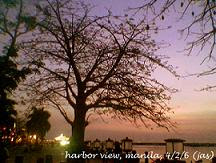 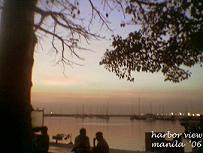 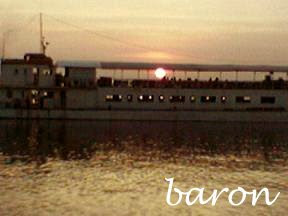 Places to Visit in the Philippines : Davao

Philippines is such a very beautiful country. For me, it's still paradise..except for traffic and politics. We have lots of political issues to date, but i don't want to say something about that. Instead, i want to share with you the best places to visit while here in the our country. I'll start with Davao. I went there for a business meeting and site inspection for the Air Navigation Facilities Modernization Project last August of 2003. Its been five years. It was one of the best places I've ever been. Given the chance, i would be very happy to go back.

First, I'd like to give a brief introduction of Davao Region.

Philippines is subdivided in different region. Davao Region is located on the southeastern portion of Mindanao. Davao Region consists of four provinces such as Compostela Valley, Davao del Norte, Davao Oriental, and Davao del Sur. The region encloses the Davao Gulf and its center is Davao City. Davao is the Hispanicized pronunciation of daba-daba, the Bagobo word for "fire" (the Cebuano translation is "kayo").

There are two islands i wanted to visit in Davao region. The Samal and Malipano Islands.

Samal Island is called The Island Garden. Samal is a 2nd class city in the province of Davao del Norte. The name is often abbreviated into IGaCoS. The Island Garden City of Samal is now a part of (Metropolitan Davao) Metro Davao. This photo is not actually mine. I got this from yahoo images. Next time, I'll be posting mine. hehehe..i really want to go back to Davao and visit the places I've never been.

Next to Samal Island is the Malipano Island. Its about 3800 feet from Samal Island. I don't have much information about this island, except for the articles that i read stating that its a perfect place for beach wedding as well as private party. Hmmm, I'm intrigue..i hope that one time i could visit this place too.

Till next time, I'll be posting about Cebu, the Queen City of the South.
Posted by yessamin No comments:

Another Batch of Nihongo Vocabulary

Once again, I’m studying for my quiz in Nihongo tomorrow. I got a perfect score in my last quiz. Hope that I’ll get the same in my next ..hehe..
Just want to share my new set of vocabulary. Enjoy learning the language with me..

Till next time..
Posted by yessamin No comments:

October was a very poor month for me in terms of health. I was sick for two consecutive weeks. Last week I have a severe case of diarrhea which resulted to low level of potassium in the body. During that time, i could hardly lift my arms. The doctor said that its the effect of that. It could also be fatal coz it could lead to heart failure. Good thing i was able to eat banana during that time, a food rich in potassium. Then last night, i was rushed to emergency room of Makati Medical Center. I woke up with severe headache, pain in my neck and chest, as well as numbness in my arms and legs. I felt so nervous. I had ECG and X-ray on my neck last night to see if i had narrowing blood vessel. I'm thankful that my heart is fine. It was found out that my neck was not in its proper curvature, maybe it was caused by tightening of muscles around my neck. The chest pain was costocondritis. I was given pain reliever thru IV. Gosh, it was so painful, i cried when it was injected in me. But after two hours of staying in the emergency room, i was discharged. The pain was almost gone, but the doctor told me that it might come back after six hours since the effect of injected medicine will be gone. I was given a medicine to take twice a day and i have to take a rest for two three days.
It was so hard getting sick and every time i was sick, I value good health more. So lets take care of our health because health is wealth.
Posted by yessamin 2 comments:

It’s been quite a while since I last posted something about Nihongo vocabulary. Now that I am studying vocabulary for my quiz tomorrow, I want to share it with you. Enjoy learning the language with me.

Till next time.
Posted by yessamin No comments:

Hi, how are you doing up there? Its been 10 months since you left us. Honestly, coping with it was hard. To this day, i still cry whenever i remember you. I miss you so much, in fact, the family miss you so much. Our house was not as lively as before, our lives were changed forever.

Christmas is fast approaching, is Santa Claus busy preparing gifts for good people? hehehehe... Kidding aside, your daughter's birthday is fast approaching. We're going to celebrate it in our house just like her baptism. Ching's family will come over. Your daughter is really beautiful and funny...just like you. She's also noisy. As a matter of fact, she totally resembles you. I'm pretty sure that if you are still here, you'll be very proud of her. By the way, she already had seven teeth and could start walking.

Dale was promoted recently as Asst. Manager. I know you're very proud of him in the same way that we are. Chan is in his 3rd year. Two more years to go and he'll be a engineer like me. I recently got promoted too. Mom is fine and so with dad. Ei, good news, we notice some slight changes to dad..hope it will continue.

You know what, Bebong asked me how did i feel if you're "nagpaparamdam". I told him that i smell the essence of alcohol...just like what we smell in the hospitals. He told me that he smelled that last Tuesday in their house. That was the time when i was sick. Is it true? "Nagparamdam ka sa kanya?". I told him that its you, reminding him to take care of me.

Till next time. I'll be updating you about our lives. Always remember that we really love you. Though you're not here with us anymore, your memories will linger. You will always be in our hearts. I love you bro.

Labels: Letters to My Brother 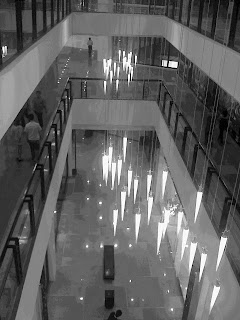 This photo was taken last night at Greenbelt 5 using my phone. I had dinner with my officemates at Oody's in Greenbelt 3. We're suppose to have coffee somewhere, along the way, we passed by this mall. Their interior lights were so nice. I loved their designs. 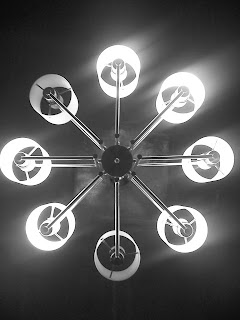 I took this photo in the fitting room of Market Market Department Store. It's a ceiling light. I took this using my Motorola V9 phone. I set it's color in black and white. I'm happy with the results..I hope you'll enjoy this too.
Posted by yessamin 2 comments:

yessamin
a civil engineer by profession who loves writing, photography and travelling.